Skip to content
In this issue get to know Emmerich Knoll III, the Wachau and the Pfaffenberg vineyard.

Third generation Emmerich Knoll III, the leading spokesperson for the Wachau region, farms the family’s 15 hectares of land and crafts wines that clearly express the Wachau (and Kremstal) terroir where some of Austria’s most famous vineyards live. This family run winery is a treasure that has been estate owned and operated for over three generations. A member of “Vinea Wachau Nobilis Districtus,” an association of Wachau winemakers who follow strict quality control rules, the Knoll Winery upholds stringent farming and winemaking standards that vintage after vintage propel their wines to the top of restaurant, collector and critics’ lists. While in the Wachau, one can also dine at the family’s acclaimed, 400 year old restaurant, Loibnerhof Familie Knoll.

Emmerich Knoll doesn’t like overpowered wines. Tight, concentrated and balanced wines, which express the terroir of their sites is the credo of the estate. Knoll’s wines are generally regarded as late developers with tremendous aging potential, the best of which will keep for decades. 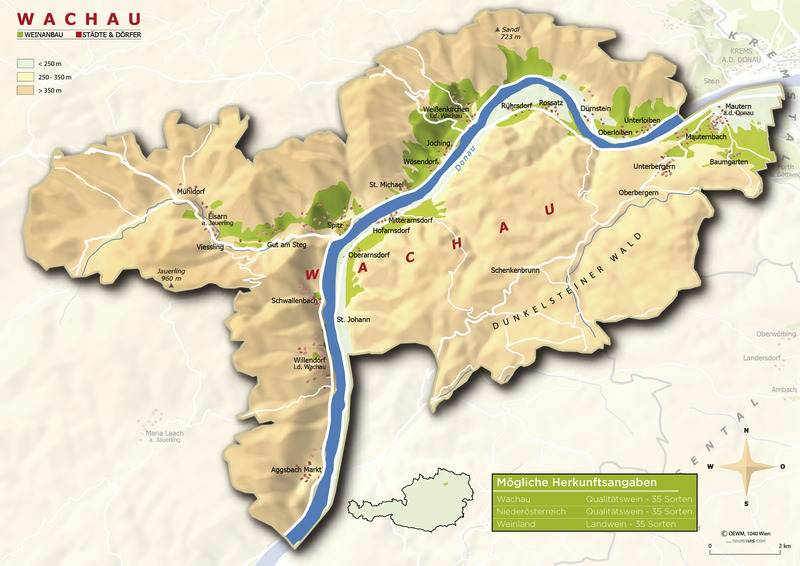 With rich history and favorable climate, the Wachau is known as one of the greatest terriors in Austria. Although the region is less than 15 miles long, the unique landscape and vineyards make it renown. Located a short hour’s drive northwest of Vienna the Wachau is famous for the unique steep stone terraced vineyards rising up on the North side or “left bank” of the Danube River, as it flows West to East.

With the winds from the western Atlantic Ocean and the warm inland air currents from the eastern Pannonian basin, the Wachau has two major climatic influences. Dependent on the incline, soil terrain, exposure to the sun, dry stonewalls and cliffsides, each terraced vineyard develops its own exclusive microclimate. The terraced soils contain so called Urgestein, or primary rock/primordial stone, which can be classified as a form of gneiss or granite that is layered in structure. The influences of the Danube River counters the effects of the harsh winters and hot, dry summers. During the most important months prior to harvest, the cool evening breezes from the north increase the extremes in temperature from day to night, strengthening the flavors of the grapes.

In December of 2000, the United Nations Educational, Scientific, and Cultural Organization (UNESCO) recognized the Wachau on its List of World Heritage Sites for its historical architecture and agriculture. A notable historical site is the Dürnstein Castle, where Duke Leopold of Austria held King Richard the Lion Heart of England captive after the Third Crusade of 1189-1192. The sophisticated architecture of the Wachau’s earliest monasteries, i.e. Göttweig Abbey and Melk Abbey, compliment the agriculture cultivated by the famous terraced vineyards.

By all counts Emmerich Knoll’s Pfaffenberg vineyard should be considered a Wachau site because of its geologic characteristics rather than political borders.

Before the Vinea Wachau was formed, the city of Krems could be considered the capital of the Wachau. Krems sits next to the town of Stein, which marks the present-day limit between the Wachau and the Kremstal. The vineyards of Krems and Stein on the “left bank” seem to belong to the Wachau with their characteristic steep Urgestein terraces that run in to the Danube, however, they are technically considered part of the Kremstal.  Why?!  Growers in the Wachau prior to the Vinea Wachau ruling were cautious of the powerful merchant presence in Krems and were aware of the dramatic differences in sun exposure and soil composition on the “right bank” of the river, where the majority of the Kremstal lay. They wanted the Wachau’s focus on these Urgestein terraces so they petitioned Krems, including the geologically similar Pfaffenberg vineyard out of what we now consider the Wachau.

The arbitrary socio-political line separating the two appellations becomes apparent upon visiting the Pfaffenberg site in the Kremstal and the Loibenberg site in the Wachau. (Check out the video) The Pfaffenberg is made up of primary rock, or gneiss, granite and schist with a top layer of loess, and is known for producing softer, open wines.  The Loibenberg vineyard is made up of gneiss and produces structured, spicy wines.  The two vineyards produce markedly different wines but the main terrior characteristics of gneiss/Urgestein and steep terracing along with the fact that the two vineyards are on the same slope exemplify more similarities than differences. In this way the Pfaffenberg can be considered “An-Other” Wachau.

Take a video tour of the Pfaffenberg with Emmerich

Heaven is St. Urban on a Label

Although there have been whimsical, and incorrect, descriptions of the “exploding Jesus” label on Knoll wines, the distinct picture actually illustrates St. Urban, the patron saint of winemakers and vineyards. The label image originates from a famous painting by notable Austrian artist Siegfried Stoitzner, which hangs in the Knoll Family Restaurant the Loibnerhof.

Pursuant to the Vinea Wachau, there are three levels of wine classifications represented on the label: Smaragd, Federspiel, and Steinfeder. Smaragd is a category for the highest level and most valuable wines of the Wachau; it was first used for the vintage year 1986. With minimum alcoholic volumes and must weights of 12.5% and 18.2°KMW respectively (KMW, or “Klosterneuburger Mostwaage,” is a unit, which defines the amount of natural sugar in wine must). Federspiel is the category of wines with a must weight of 17°KMW and an alcohol level between 11.5% and 12.5%. (These wines are without exception classically dry fermented and excel with their fruity character and powerful delicacy.) Steinfeder is the lightest category with a minimum must weight of 15° KMW and a maximum of 11.5% alcohol, though it is not exported by Knoll.

“If you meet the Buddha, kill him” – Zen Master Linji

My first introduction to wine was at Kimball’s Peak Three Theater in Colorado Springs. Kimball’s is one of those fancy, culture driven theaters that serves wine by the glass and delicious treats to entice a grown-up audience interested in expanding their indie movie horizons.  As it turns out, Kimball’s wasn’t just a great place to ponder the finery of the human mind, it also was the perfect place for a new college graduate, who survived the college experience as a serious tee-totaler, to discover that she had a nose for wine. A dear friend, who was a burgeoning wine lover asked me to just “smell the wine.” In the moment that I inhaled the first aromas of the Napa Valley Red Zinfandel in the glass before me, I knew that whatever had just happened to me was something that I did not understand. Why didn’t this wine smell like wine (or the wine I grew up smelling that led me to vocationally drink tea)? How did the winemaker add the cherry, mulch and chocolate aromas? Isn’t Zinfandel supposed to be pink? The numerous questions of a wine interested but wine ignorant person flooded my brain and sparked an avalanche of curiousity. Fortunately, I am not a cat, and this curiosity has not killed me (yet).  Actually, It did the opposite of kill me; it breathed life into my life as I read, searched, visited, tasted and began to walk the #winelife.

How does this relate to the wines of Emmerich Knoll?

If you have read this far then you already know that knowing everything about wine is virtually impossible. You can learn many facts, visit many vineyards, train your palate to memorize nuances, develop your preferences and then along will come a wine that breaks your brain because it brilliantly misbehaves in a way that shatters most of what you have diligently learned. In the youth of my wine palate, the wines of Knoll were at the top among these “brain breakers.” I was already skipping down the path of falling in love with bright, tense, white wines and crisp, crunchy, reds wines when I was introduced to the Knoll wines on a hot day in the Sonoran Desert.  I found myself befuddled not by the label or the words on it, but because the Smaragd Grüner Veltliners and Rieslings had the structure and texture that I would more associate with red wines.  They were intensely built, kind of plush but with a streamline of minerals and acid that gave them lightness. The Grüner Veltiners were both savory and exotically fruited; the Rieslings had stony scaffolding surrounded by aromas of fleshy tree and stone fruits tempered by a saltiness that I had not previously tasted in a wine. These are broad strokes of my impressions but, at the time, I did not have much experience with white wines fermented at length on the skins and aged in large, neutral, oak casks.  I did not know much about the Wachau, did not understand the influence of the Danube on this region, had no clue about the Urgestein and had never been to Austria.  Through the wines of Knoll and their colleagues in the Wachau and beyond, however, the curiosity that made me abandon a life of tee-totaling was once again sparked and Knoll continues to be a driving force behind my continued exploration of the #winelife.

If you are still reading, you many be cursing me because you know that Knoll’s wines are very limited and mostly found in restaurants.  Why are we even sending out this newsletter? Well, I believe that a Knoll wine is the kind of wine that you must experience on your wine road because it will change what you think of wine.  If you meet a bottle of Knoll, kill it.

The shirt bares a whimsical representation of St. Urban of Langres, Patron Saint of the Wine Industry, immortalized in the famous painting hanging in Loibnerhof Familie Knoll and which graces the label of all Knoll wines. $20 plus shipping and handling. Credit Cards accepted. #itstheschutt

Read about the “Best White Wine On Earth” with Stuart Pigott

Learn more about the Vinea Wachau and the Codex Wachau.