Many of you may know Circo Vino for it’s Austrian focused portfolio. While we are enamored with the wines of this small but mighty wine producing country, this month’s newsletter spotlight shines upon some of our friends crafting fabulous wines from other areas of Europe. We invite you to get to know Domaine Ciringa in the Štajerska Slovenija wine-growing region of Slovenia.

The Tement name has always been synonymous with great Austrian wine. The ascension of Manfred Tement’s son Armin into the ranks of winemaker is a powerful extension of a great family tradition. Armin, having grown up inexorably connected to the land about him and the workings of his family’s winery, accepted the mantle of Winemaker and Vineyard Manager in 2005. The Tement winery is located in the mountainous region of Southern Styria, known in Austria as the Südsteiermark, near the Slovenian border. The unique conditions of shell, limestone soil and cool air produce some of the best Sauvignon Blanc. The Tements have always wanted to grow a single grape on a top single vineyard, prompting them to seek out Slovenia’s unfulfilled potential. 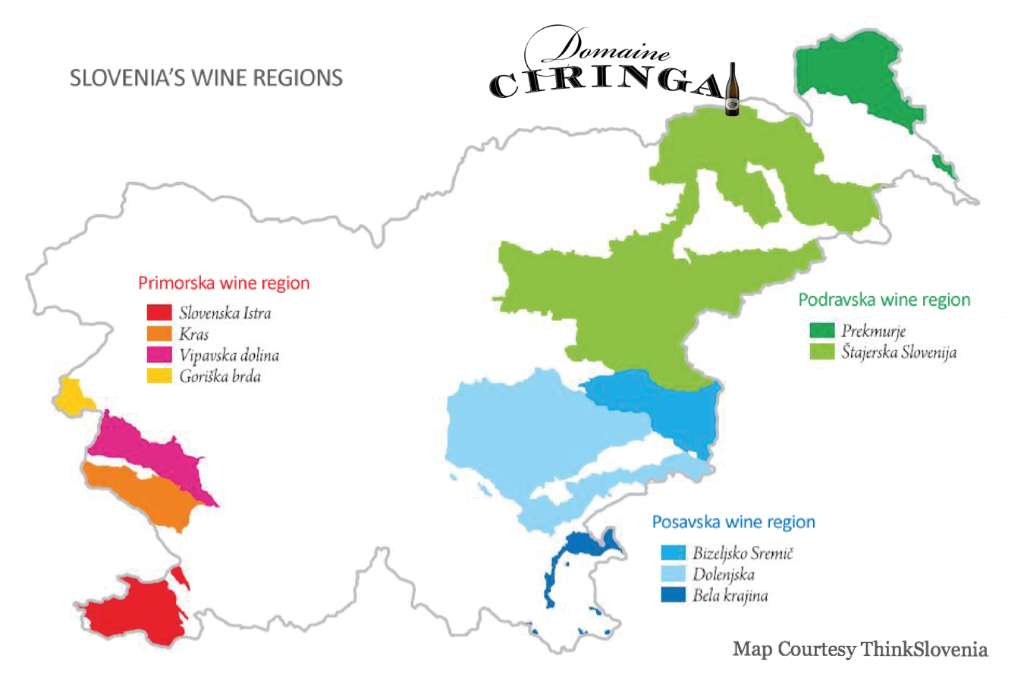 As one of the many geographical cross roads of cultures in Eastern Europe, modern day Slovenia has enjoyed a rich viticultural history dating back to the Celts, long before the Romans brought wine making techniques to the area.  Today the country has continued to produce quality wines mostly for domestic consumption.  The small quantities that are exported are of the highest quality and enjoyed by discerning sommeliers and wine drinkers alike.

The Podravje appellation is one of three major areas in Slovenia demarcated for wine, with Štajerska Slovenija being a sub region located in the northeastern part of the country. The climate here is mostly continental, characterized by hot summers and cold winters, although many microclimates exist. Vineyards are typically grown at an altitude of 250-400 meters. Slovenia also boasts the oldest known grape vine in the world located in the town of Maribor.  The 440-year-old vine known as Strata trta is of the Zametovka variety, an indigenous Slovenian cultivar. The area is not only famous for its fine wines and rich history but the irresistibly bucolic landscape of rolling green hills oft-shrouded in fog.

This territory with shell limestone and cambisol soil provides ideal growing conditions for this mineralic wine. Only Sauvignon Blanc grows on the slopes of Ciringa, the Slovenian part of winery Tement‘s most important single vineyard Zieregg.

Aspiring to signify origin from Fosilni Breg or “fossil mountain”, and balance of this sincere Sauvignon Blanc, the bottle’s label displays a sea biscuit shell fossil.

The Other Side of The Zieregg 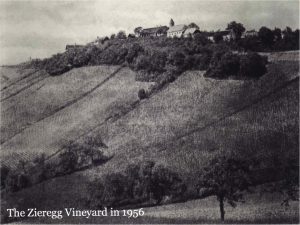 In Štajerska Slovenija, Domaine Ciringa sits at the southeastern border with Austria in the northeast part of the country.  Armin grew up on the Austrian side of the border and had always admired his family’s important Zieregg vineyard and the expressive Sauvignon Blanc crafted by his father.  This vineyard is actually bisected by the political border between Slovenia and Austria (pictured below), reflecting the colorful history this area is known for.  Slovenia was an Eastern Bloc country and up until 1991 the Tements really had no opportunity to expand their holdings east, to Slovenia, other than a vague notion or dream of what could be.   In 2004, fully thirteen years after the fall of Communism, the possibility arose for the family to purchase the eastern part of the Zieregg vineyard on the Slovenian side of the slope. They jumped at the chance and began planting with Sauvignon Blanc grapes.  The new single vineyard, Domaine Ciringa, was christened after the nearby Slovenian namesake village.

The 20 hectare site benefits from mineral rich soil, the remnants of a 20 million year old coral reef. The vineyard sits at an altitude of 470 meters with a south facing exposition, essential to producing authentic, mineral rich Sauvignon Blancs. Adjacent to the Austrian districtus, Südsteiermark, (famous for consistent high quality Sauvignon Blanc) Domaine Ciringa’s particular microclimate is influenced by the Alps, with cool nights and warm autumn days the norm. These conditions extend the growing period of the vines and fortify the development of distinct elements of these aromatic fine wines. Combined with the mountains to the south and the cool breeze, Fosilni Breg Sauvignon Blanc exhibits the origin-accentuated qualities of mineral, peaches, herb, and pepper, capturing the geology’s specific essence.  Armin farms Domaine Ciringa biodynamically in accordance with the ideologies of Rudolf Steiner.

The Tement brothers, Armin and Stefan, grew up surrounded by the picturesque landscape and vineyards of the Südsteiermark. Their opportunity to connect with nature and understand the terroir of their ancestral land led both men to an almost spiritual relationship to their patch of earth. Armin fondly recalls the, “. . . magical sight,” when the young vines incubated during vegetation yearning to reveal their potential. Of course both brothers were required to help in the vineyards as children, which was demanding as the Tement Estate and by extension Domaine Ciringa, prides itself on the hand worked nature of it’s operation. These childhood tests taught them the importance of hard work and perseverance, qualities both brothers are known for today. Coming of age and determined to follow in his father’s footsteps, Armin attended winemaking school in Krems, double majoring with a business degree. During that time he learned other methods of production but the most influential things he learned were at home, through his father’s experienced hand. He believes, “Nobody embodies our family wines better than my father.”

The Tement family was in disbelief when they finally received the opportunity to buy the other half of their heart, the other half of Zieregg.  Domaine Ciringa was replanted in 2006 with the best native rootstocks and tried and true Styrian clones. The first vintage yielded 2,600 bottles in 2009.  When Armin had his first sips of this Sauvignon Blanc, his dreams were fulfilled stating, “The taste of Fosilni Breg is very special, my brother Stefan always says, ‘a dream come true – magic!’ The purity and minerality of this wines is very balanced and elegant.” Indeed Fosilni Breg Sauvignon Blanc carries the distinction of Vrhunkso vino ZGP, Slovenia’s highest category of wine given to premium quality wines only.  Today, the area expands over 20 hectares of the most outstanding cru, or a vineyard of recognized quality. Armin is looking forward to watching his vines grow, becoming older and older, and producing better and better wines.

A word from our founder…

“If you have built castles in the air, your work need not be lost; that is where they should be.  Now put foundations under them.” – Henry David Thoureau, Walden

The first time I spoke to Armin Tement about his family’s estate, Domaine Ciringa,  we were in a busy, noisy and crowded room at the historic Hofburg Palace in Vienna.  I had heard whispers about the Tement Family’s Slovenian Sauvignon Blanc and was curious about how it might differ from the powerful and masterful Austrian Sauvignon Blanc they craft under their family name. It was difficult not to be skeptical as there are so many projects in the business of wine that capitalize on the opportunity to do the same old thing in a new place; “put a bird on it,” and market the wine as being a singular idea.  Already worried about how I would position Sauvignon Blanc from Slovenia in our portfolio, I really hoped not to like the wine.

“It was always my father’s dream to own this vineyard and make a single Sauvignon Blanc wine from it,” Armin said as he poured for me Domaine Ciringa’s nascent vintage, the 2009 Fosilni Breg.  “We make only one wine from this site and that is our plan.”  Intention and passion spread with Armin’s smile.

The Domaine Ciringa “Fosilni Breg” Sauvignon Blanc won me over in the first sip.  While it bears the mark of nature’s rhythm in every vintage, this wine never fails to convey the crunchy minerality born from the ancient seabed on which it is grown.  The tightly focused but balanced layers of citrus and stone fruit, wild herbs and sea salt feel expansive but not overwhelming.  The wine is a shock of crisp, white linens and the comfort of sleeping in the sunshine.  Importantly, you can feel the intention and passion of Tement hands on the wine but Fosilni Breg is decidedly its own character and is not a copy of its Austrian siblings.

Like so much of Slovenian history, the access to purchase the Ciringa land could not have been predicted. The immediate proximity of the Austrian Zieregg vineyard and the Slovenian Fosilni Breg vineyard is a reminder that while the land wants to be one, the political ideas of human beings can turn one place into another.  In this time, the political boundary has put a spotlight on what would otherwise be treated as one vineyard site, giving this special “fossil hill” the opportunity to shine in its own light. 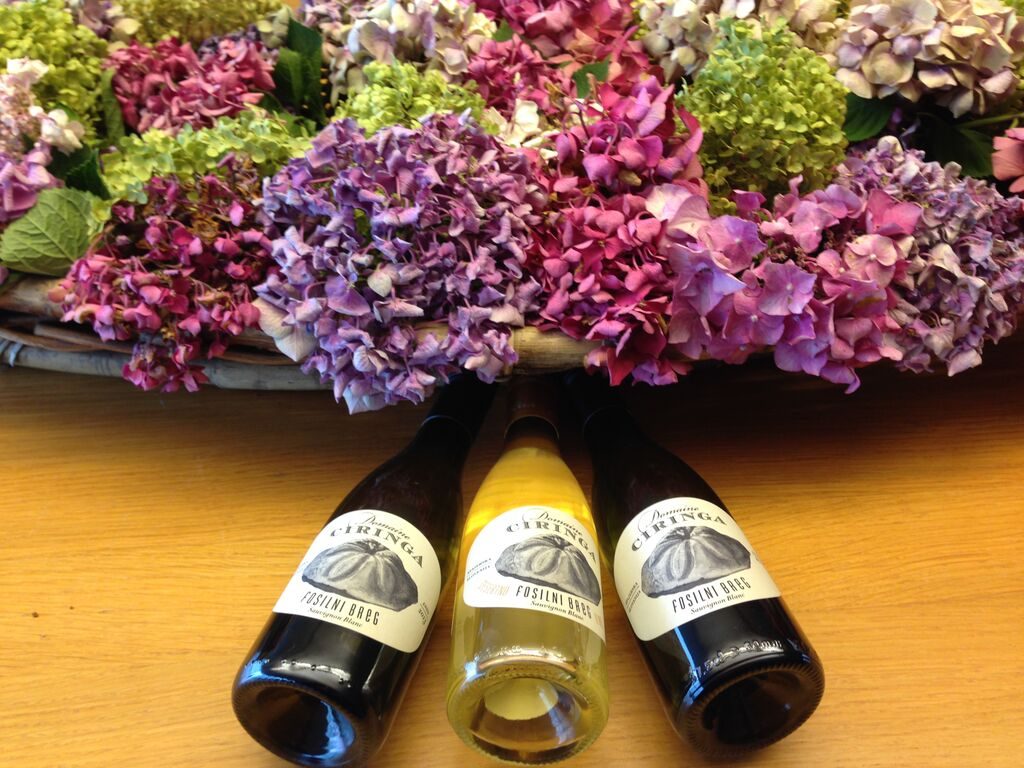