Skip to content
In this issue, get to know Fritz Wieninger of Hajszan Neumann, Wiener Gemischter Satz, and what makes this dynamic line so divine.

Vines in the City of Wien 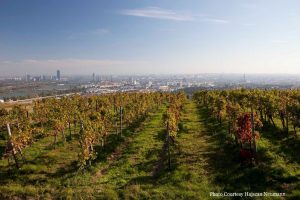 At the intersection of several different climate zones, Vienna is blessed with unique viticultural conditions. The Pannonian climate contributes to the maturity in the wine while cool winds from the north give the wine fresh and fruity notes. It’s a perfect combination of forces to produce fruity, elegant wines fun for drinking. The temperate Mediterranean climate and the diverse soil content consisting of slate, loam, marl, loess and pure sand, are ideal conditions for white grape varietals. In fact, 85% of plantings are dedicated to white varieties.

Gemischter Satz, most often described as a field blend of different varieties, cultivated and vinified together has been a traditional wine of Viennese buschenschank and heurigen. Winemakers in former times made this style of wine as an easy cure all, in that different types of varieties planted together would be impervious to the unpredictability of mother nature.   Where one variety may ripen early and others later, cultivating and vinifying this cornucopia of grapes together helped to insure the resulting wine was balanced and drinkable no matter the growing or harvest conditions. Conversely, Gemischter Satz may have fallen out of favor in the intervening years as monoculture of single varieties expressing terrior gained popularity.  Gemischter Satz was looked down upon as a base wine suitable only for mass consumption. In the late eighties many Gemischter Satz vineyards were dug up, left fallow, or replanted with a single variety.  In the intervening years, Viennese winemakers, eager to reconnect with a bygone era began to take another look at Gemischter Satz.  Historic vineyards above the city center upon the famed Nussberg were once again harvested.  Winemakers, such as Fritz and Stefan began to craft more complex Gemischter Satz styles, a far cry from the simpler wines characteristic of the past.  Through their persistence and hard work, along with dedicated work coming from other Viennese producers, Wiener Gemischter Satz garnered DAC status in 2013. Guidelines of the DAC, or Districtus Austriae Controllatus, include: At least three quality white varieties grown in a Viennese vineyard, then harvested and pressed together. The blend must be composed of no more than 50% of the first varietal and no less than 10% of the third largest portion, and there must be no expression of oak. Further guidelines cover single vineyard plantings. Unlike most DAC designations, this is the first time a wine style as well as a growing region has been codified.

This fragrant and fresh wine shows plenty of complexity as well. The palate is elegant, light and tasty, and exudes a vibrant acidity structure. This wine delivers pure pleasure with its spicy, fresh character and makes an ideal companion for light cuisine.

Gemischter Satz is commonly associated with Vienna’s heuriger or buschenshank, culture. An early example of the now popular “farm to table” concept, the family heuriger or wine tavern traces its roots to 1794, when Enlightenment era Emperor, Joseph II passed an edict allowing producers to sell their own wines. It gave winemakers the opportunity to share their latest creations to the public from their own home, and is now an integral part of Austrian culture.   Typically, these heurigers, can be found near the winery or nestled within the vineyards with long wooden community tables indicative of the traditional, social nature of these institutions.

Patrons are able to purchase Austrian delicacies like cheeses and house made charcuterie platters, served with sliced bread and various spreads to compliment the wine and good company.  A real heuriger is not allowed to serve any hot foods. Traditional Viennese music played by a local band is also a customary highlight and adds to the charm of these cultural gathering places.  In Austria this warm, friendly character and atmosphere of the heuriger is referred to as Gemütlichkeit.   A smaller version of a heuriger is called a “buschenschank,” often times hidden amongst the vineyards serving food and wine for only a few weeks per year. The name derives from the classic bundle of pine boughs, known as a “buschen,” found at the entrance as a signal that the wine is ready and as a welcome for guests to come in.

Hajszan Neumann and Fritz Wieninger are proud to announce the renovation of the winery’s restaurant.  Now led by three Michelin star chef, Juan Amador, patrons are treated to an amazing six course meal in the newly remodeled cellar dining room.  Amador’s modern cuisine pairs well with an extensive selection of wine from not only Hajszan Neumann but world wide offerings curated by Fritz.  A boon to the local foodie scene, Amador’s Wirsthaus & Greißlerei, will fast become a destination for epicures everywhere.

Fritz Wieninger and Hajszan Neumann’s story is one of transformation and self-discovery.   Fritz’s path to enlightenment began with his own vineyards.  He eschewed conventional practices of the time, embracing his historic Gemischter Satz vineyards rather than ripping them up to replant with a single variety.   Wholeheartedly convinced of the potential for Gemischter Satz, Fritz became one of its most vocal proponents.  He helped found the Wien Wein group in 2006, of which he is still the chairman.  Wien Wein is a dedicated group of Viennese wineries whose mission is to, “. . . set new measures of quality for Vienna wine; to show wine lovers both in Vienna and beyond the Austrian borders, that wine from Vienna has its own unique character; to enhance every wine list and to claim a place in the international wine world.”  Through their efforts Wiener Gemischter Satz has become more well known by the wine cognoscenti and those wine lovers eager to discover Old World gems.  2006 was a seminal year for Fritz, marking his transition to biodynamic farming, a practice taught to him by Stefan Hajszan, the original practitioner of the method in Vienna.  Fritz witnessed the gradual improvement and health of his vineyards and resultant wines year by year.  So convinced of the importance of this method of farming, Fritz is also a member of Respekt, the most important biodynamic vintners organization in Austria.   Upon the acquisition of Stefan Hajszan’s vineyards in 2014, Fritz is now able to fully embrace his winemaking evolution.  For someone whose wine school dissertation was on the uses of sulphur in winemaking, he has come a long way to now crafting complex, extended skin contact, fermented in concrete egg, white wines, from Hajszan Neumann fruit.  The introduction of these orange wines under the Natural name, debuted at Vie Vinum 2016.  They include a Wiener Gemischter Satz DAC and a Traminer, marking a new beginning for the winery and, indeed, for Fritz, as he is able to mold the character of Hajszan Neumann in new and dynamic ways.

Fritz of the Future

“The Best Way to Predict the Future is to Create It.”  – Abraham Lincoln

Do you every wonder what it would feel like to read a letter written to you by an earlier, younger version of you?  Would she tell you what she was thinking about current events?  Would he have mentioned favorite books, music or wine?  Would she have been philosophical and told you about her current struggle and worldviews?  Would you, as the future recipient of this letter from your past self, be surprised that future you is the same or so different than the you of yesterday?

I have often wondered if Fritz Wieninger has those moments, as he looks at all he has crafted in the pursuit of wine, when he looks back in subtle awe at the arc his life has taken as a winemaker and tastemaker in Vienna.  Fritz is someone who never can “sit still” and he certainly doesn’t wait for “things to happen.” From the early days in his winemaking career, when he was known in Austria as “Mr. Chardonnay,” until now, as the proprietor of two biodynamically farmed wineries, Fritz has evolved his thinking at such a pace that I think Darwinists may want to study him.

Fifteen years ago, I could not have predicted that this man would decide to lead the charge in making Wiener Gemischter Satz, once again, important.  The development of WienWein has spread a depth of knowledge and understanding about Vienna’s traditional wine customs at a time when the world could easily have forgotten its unique situation.  The Fritz of the past, whom I knew, would not have taken the time to wax poetic on the intrinsic importance of healthy vineyards or the spiritual life of vines.  He most definitely would not have presented me with a deliciously crafted glass of macerated Gemischter Satz and discussed with me his thoughts on using concrete as a fermentation vessel.

Where many would feel pressured and pressed by owning two wineries and a highly lauded restaurant, Fritz seems to thrive on the possibilities.  For we at Circo Vino, our excitement in working with the Hajszan Neumann wines is bubbling up like fermenting Gemischter Satz.  The diversity and open-mindedness that Fritz is showing in his wine selection paired with the high level at which he is working both in the vineyard and cellar is nothing short of thrilling. He shows us that fresh ideas are not just the providence of the young but for anyone who is willing to explore.  As well, his experience in the business of wine allows him to deliver results in a way that gives a wide audience permission to experience wines that they may not have found on their own.
What will Fritz of the future think of the letter that he receives from Fritz of today?  I can only imagine that his reaction may only be expressed in 3D emojis.

Couldn’t make it to the New York Portfolio Testing? No problem, we’ve got you covered with all the highlights in this short slideshow!