Skip to content
In this issue, get to know Kelly and Todd Bostock of Dos Cabezas WineWorks, the Sonoita AVA of Arizona, and find out what’s behind the hashtag, #IPinkThereforeIcan.

Dos Cabezas WineWorks was founded in 1995 and for over 20 years, the winery has played an integral role in the rapidly growing Arizona wine scene. Originally located in Kansas Settlement, a farming community 10 miles South of Willcox, Arizona, the winery and 80 acres of vineyard were pioneered by the late visionary, Al Buhl. In 2001, Todd Bostock joined the team as winemaker.  By the end of 2006, the Bostock family took over operations of the winery, and it was moved to Sonoita where it resides today. The winery is supplied with distinctive, high-quality fruit from its two estate vineyards: Pronghorn Vineyard in Elgin, and Cimarron Vineyard in the Kansas Settlement. Growing over 30 grape varieties amongst the two holdings, Kelly and Todd are kept busy between the two sites. The Bostocks produce unique reds and whites from the high desert terroir, having mastered the demanding conditions to great success. Kelly and Todd’s understanding of their terroir and winemaking techniques can be tasted in their ironically eponymous, white blend, Meskeoli, touted by Riesling luminary Stuart Pigott.  Their expressive, red field blend, El Campo, has helped them to garner Jon Bonne’s favor, naming Dos Cabezas WineWorks one of ten Winemakers to Watch in 2015.  Kelly and Todd also have the helpful hands of their two sons, Griffin and Parker, and supportive paws from their vineyard dog, Closie Dogstock.

While most of Arizona is known for its dry heat, a short hour’s drive from Tucson in the Southeastern corner of the state, you will find the Sonoita AVA (American Viticultural Area).
Arizona’s first and only designation sits at 4,500 to 5,000 feet above sea level, delivering some of the highest vineyards in North America. The mountain ranges surrounding the area, the Santa Rita, the Huachuca, and the Whetstone Mountains, form the Sonoita basin and three influential microclimates.
Arizona has a summer monsoon season, bringing heavy storms that make up most of the rain for the year, sometimes up to 14 inches. The growing season is amiable offering warms days, generally below 100 degrees, and cooler nights. One of the most challenging periods for winegrowers in Sonoita is the Spring, when late frosts have the ability to wipe out much of a crop.  Soils in Sonoita consist of Igneous and Sedimentary rock, which creates a loose, well-drained soil with high amounts of calcium and gravelly loam, ideal for growing grapes. The Pronghorn vineyard sits on 15 acres and consists of brown topsoil, cobbles, kaliche, clay, and red clay. The remaining 37 acres of the Cimarron vineyard rest to the east in the town of Willcox in Cochise County. Soils in Willcox are deeper and loamier, allowing for larger yields. The area, and much of Arizona is also high in limestone, attested by the vast cave systems that can be found throughout the state.

Creating Magic in the High Desert

Kelly and Todd Bostock never really expected to become winemakers in a rural town in Southern Arizona, however, these Phoenix natives jumped at the opportunity to take over the Dos Cabezas estate in 2006.    The decision to move to Sonoita was a bold risk, considering the terroir and all of the sacrifices one makes when deciding to move a family to the far reaches of southwest Arizona, but the Bostocks are strong, willing folk.  Growing close to 30 different varieties, each its own experiment, Kelly and Todd are determined to find the strongest varietals for their Arizona sites. So far, they have had great success with traditional Rhone varieties, such as Syrah and Grenache as well as some Spanish and Italian varieties. Each plant teaches the Bostocks something new, and it takes patience to uncover what works best for the terroir of this emerging wine region. At this time, most of their crop comes from the Cimarron Vineyard, though they believe wine grown in the Pronghorn Vineyard expresses more terroir. For the Bostocks, there is no denying the unwavering pursuit to conquer this southern land because the wines produced here are magical, and as Todd says, “Right on the edge of disaster is when all the beautiful things happen.”  Dos Cabezas wines can be found nationally through Circo Vino. 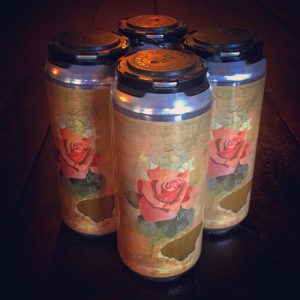 This seriously fun carbonated pink wine in a 16 oz aluminum can is a blend of Grenache, Mouvèdre, and Syrah grapes.
Dos Cabezas’ inspiration for this unique “bottling” arose (pun intended) from Todd, wanting something as portable as beer for the wine drinker on the go. Todd is honest when he says they created this wine with pure fun in mind. Not only is this dry sparkling pink a novel idea, its moderate acidity with hints of grapefruit, lemon, and elderflower, make it the perfect summer rosé. The can became so popular, selling out in some cities in less than 30 hours of its arrival, Todd decided to make it an annual production.  Currently warehoused in the New York area, this wine is available nationally, through Circo Vino. #IPinkThereforeIcan

The Bostocks don’t adhere to one winemaking philosophy, but rather have a syncretic outlook, mostly organic, but incorporating the best parts of minimal intervention, and different techniques from sustainable and biodynamic farming. One earth centric approach they have implemented is the use of birdhouses high above the vineyards. A non-grape eating type of bird has moved in and actually protects the grapes by scaring off other birds that may harm the area. Todd also tried incorporating a moveable chicken coop for natural compost, but unfortunately raccoons were able to get into the coop and have themselves a feast. Despite a few setbacks, Todd stays positive and continues to try new techniques.
When it comes to harvest season, the Bostocks and their small dedicated team are not afraid to get their hands dirty, or in this case, their feet. For instance, their Meskeoli is hand picked and sorted between the months of August and October, the clusters are stomped on by foot as part of the maceration process. At this point you might be thinking of Lucille Ball, now replace that image with the lovely Kelly Bostock and you get the picture. The wine is then fermented and aged in oak casts or concrete tanks (pictured above) for at least six months prior to the release date. Their Pink wine is fermented and aged in Polyethylene tanks for at least six months before the release date, while their El Norte and Aguileon wines are fermented and aged in oak barrels for at least 24 months before bottling, then bottle aged for 12 months.

As one of the founding members of the Arizona Vignerons Alliance, Dos Cabezas WineWorks is dedicated to shaping Arizona’s quality standards.   It was created, “to ensure quality and authenticity in Arizona wine; to improve grape growing and winemaking across all wine regions of the state; to help promote Arizona wines so they are recognized, respected and sought-after in Arizona, the U.S., and globally.”

To earn a quality seal by the AVA, each wine is assessed by an industry professional to certify the grapes are 100% Arizona grown and produced, and meet the highest quality standards. A list of certified wines can be found at
arizonavigneronsalliance.org.

A Word from The Roustabout

As a lover of Hip Hop music and an aficionado of the socio-historical context of its rise within American culture, I am always aware of the conversation between the Establishment and the impulse for change.Kelly and Todd of Dos Cabezas WineWorks, purveyors of that bomb AZ juice, are like the DJ Kool Hercs of the wine world. If you’re not familiar, DJ Kool Herc, from the Bronx, NY, is considered by many to be the founder of Hip Hop music. It was through his creative manipulation of vinyl, isolating and repeating the instrumental “break” beat from funk songs, during legendary block parties on Sedgewick Ave., that the modern culture and sound of Hip Hop boomed it’s arrival onto the music landscape. But what was this new sound, where did it come from and who listened to it?  The struggle for acceptance might be viewed as one of the most important factors in Hip Hop’s development as a music genre, but I disagree. Hip Hop’s raw, visceral portrayal of western culture did not need validation. It just was. Kelly and Todd’s love for wine just was. They’ve been doing their thing in the high desert for over a decade. Arizona is their Bronx, from which they bump the beats of their terroir unapologetically in every bottle. They aren’t trying to gain your acceptance. They are working from the spirit within, as DJ Kool Herc did, driving partygoers wild, when he mixed those two  records together for the first time. We at Circo Vino are privileged to share in their music not just as as the guy selling their mixes on the corner, but as a partner in their movement.

Dos Cabezas WineWorks
Arizona Vignerons Alliance
Stuart Pigott’s Unsung Winemaker Heroes of the South
Jon Bonné’s The next time you want to drink wine outdoors, try popping a top
All you wanted to know about this year’s Winemakers to Watch