Skip to content
In this issue, get to know Rob and Sarah Hammelman, their vines in Willcox, Arizona, and Sand-Reckoner Malvasia Bianca.

Relative newcomers to the Arizona wine scene,  Rob and Sarah Hammelman have wasted no time making a name for themselves with Sand-Reckoner Vineyards. In a nod to the sandy loam soils of the vineyard, Sand-Reckoner is named after an ancient Archimedean book that suggested the size of the universe could be calculated using grains of sand.  Formerly a math teacher, Rob became interested in winemaking in 2000 when he took a summer job with influential Arizona vintner Kent Callaghan. His experience at Callaghan Vineyards, along with subsequent winemaking adventures in France with Chateau St. Cosme and in Colorado with Two Rivers Winery, instilled Rob with a passion for terroir. In 2010, the Hammelmans purchased their 12-acre vineyard in the southeastern Arizona mountains and never looked back.

Factors of the Willcox Wine Region

Planted in 1997, Sand-Reckoner’s  farm sits about 80 miles east of Tucson in Cochise County. At an altitude of 4,300 feet, the continental climate provides cold winters and warm summers with large daily temperature swings. Although the month of August delivers the most amount of rain, Willcox receives up to 13 inches annually. Chosen for its Sandy Loam soil with limestone rock four feet deep, the plot is well-suited for grape development.  The rocky soil allows for proper drainage to grow Malvasia Bianca, Nebbiolo, Sangiovese, Sagrantino, Montepulciano, Syrah, Petit Verdot, and Zinfandel, which is why Willcox produces 74% of the states wine grapes. 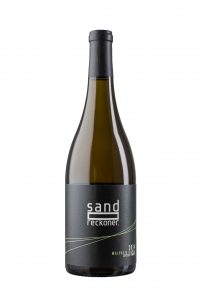 “The 2014 displays intense floral notes and taut structure reminiscent of 2010 and shows promising aging potential.  Destemmed and crushed with an average of 12 hours on the skins before pressing.  Barrel fermented and aged in old French oak sur lie for 8 months.  Pretty aromatics of elderflower and perfume with notes of peach and clove spice.  Bright stone fruits of peach and lychee, finely textured, refreshing mineral finish.”
100% Malvasia Bianca
14.1% Alcohol

In the Name of Math 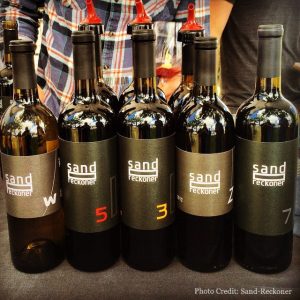 It is no secret that winemaker Rob Hammelman is a math geek at heart. In fact, if you get the chance to speak with Rob himself, he might even state in a somewhat wistful tone, “I love to do math!” To continue his dedication, they developed a labeling series featuring prime numbers and variables, or letters. Estate wines can be recognized by a prime number (2, 3, 5, 7, 11), while wines with a variable (w, r, x, a, z) are from Sand-Reckoner’s collaboration with other vineyards. Limited wines have labels that look like plotted graph sections.

Due to its love for small business, people, culture of place, and creative energy, the city of Tucson has been chosen for Sand-Reckoner’s tasting room. Not only is Tucson known for its prestigious university, but it has also recently been recognized as an UNESCO City of Gastronomy. The Hammelmans are eager to be, “in the middle of an exciting arts and beverage district unique to southern Arizona.” They believe, “Tucson is the gateway to Arizona wine country.” Rob and Sarah’s dedication to their community, and to the future of Arizona viticulture sparked their roles as founding members of the Arizona Vignerons Alliance, where Sarah serves as Vice President.

The Hammelmans have had an extra set of tiny hands along their journey in winemaking. Levi, born in March of 2013, has played an integral role in the family business since he was just six months old. From growing, harvesting, to even stomping grapes, Levi has been a part of the action. In fact, they honored his one-month birthday by planting a small set of vines under the name of “Levi’s block.” Baby brother, August, has been given the same winemaking experience, even making an appearance at the winery’s library tasting.

It All Adds Up to Land, Sky, and Place 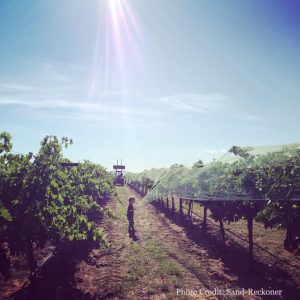 As first generation winemakers in a viticultural area that was breaking new ground, Rob and Sarah knew growing grapes would be a challenge. Luckily, their diligent spirit has allowed them to produce grapes that express the “land, sky, and place” in which they are grown, as Sarah likes to describe. Their philosophy tends to the needs of the vines in order for the grapes to express themselves, then that established expression is lead right into the bottle.  The family-run business hand crafts their wines with the highest level of care and attentiveness using estate grown grapes, as well as fruit sourced from neighboring vineyards like Rhumb Line and Red Tree Ranch.  In the vineyard, the Hammelmans are devoted to practicing sustainable farming, which excludes the use of synthetic pesticides, fungicides, or herbicides, and utilizing the knowledge gained while working with the Grenache vines in France.

Built in 1948, a storefront building in downtown Willcox is home to Sand-Reckoner’s cellar. Serving as an auto parts store for a number of years, the facility was converted into a temperature controlled barrel room in 2010, and they have been making their wine there ever since. The back of the building, formerly the garage, is used to do their crushing and fermenting. Rob likes to use the method of co-fermenting, which is a technique many wineries throughout the Rhone Valley employ in order to acquire balance and unity from an early stage within the wine. Rob is finding nontraditionally co-fermented varietals like Syrah and Sangiovese, Syrah and Tannat, and even Cabernet Franc and Petit Verdot to be exceedingly interesting in Arizona.

The Long and The Short of It

“Nature uses only the longest threads to weave her patterns, so that each small piece of her fabric reveals the organization of the entire tapestry. ” – Richard P. Feynman, The Character of Physical Law

I first met Sarah and Rob Hammelman at Dos Cabezas WineWorks when our families were getting together to begin a discussion of how Circo Vino and Arizona wineries could fit together and work with one another.  Their second son, August, was just weeks old and their first son, Levi, was sweetly talkative and just beginning to know a new world with a new sibling.  During a time when most families would be pulling up the quilt covers and nesting at home, the Hammelmans ventured forth in their quiet, bold way to explore the conversation of national sales and a collaboration with our company.  I had not met them prior and only had tasted a few of their wines but those first moments in their company spoke volumes about their fortitude and vision. “After making wine in Australia and France, why did you choose the Sonoran Desert to make wine?” I asked Rob.  “After making wine in Colorado, I liked the high altitude experience,” he said.  “And, I like the challenge. You can really make something happen here.”

Some months after initially meeting the Hammelmans and being impressed by the quality of their wines,  I was invited to their first library tasting at their winemaking facility in Willcox.  We tasted vintages back to 2010 (their first) of both white and red wines. It was a pleasure to explore the journey of Sand-Reckoner Vineyards through their wines.  What struck me was that their white wines aged just as well as their red wines and each vintage held its own character, distinctive from the next.  As well, you could taste the trajectory of Rob and Sarah’s exploration of their vines and terroir through their varying winemaking methodologies and trials.  Clearly, there is exceptional raw material to be found in Cochise County, and the Hammelmans are honing their knowledge of the land and are not afraid to experiment.

The Hammelmans, as a family, are a thoughtful bunch.  They do not crash through life with a take no prisoners attitude, nor do they seem cavalier or overconfident in their pioneering ways.  They are intelligent, sweet, and gentle, yet behind the smiles and quiet voices there is definitely a steely strength and discipline – a strong desire to succeed.  Sarah and Rob keep a vegan kitchen and Rob makes his own plant-based cheeses.  As parents they are low-key and loving. Their conscientious ways definitely transfer to their winemaking with meticulous harvest records and a connection for the rhythm of each vintage.  When I am with them, I get the feeling that they are “in touch” with their vision of what they strive to create in their wines, in their home, and in their relationships.

In this new year, I am delighted to introduce Sand-Reckoner Vineyards as a part of our national program and to welcome you on our journey. We are going to learn much from this family of four about the burgeoning wine land in Willcox, Arizona.  Along with the forces of Dos Cabezas WineWorks and Callaghan Vineyards we cannot wait to get more Arizonan wines on tables across the USA.